Eradication of Bacteria
Elgressy’s LPB system facilitates the automatic control and eradication of microorganisms, including Legionella Pneumophila bacteria, in hot water systems.
The system is based on an electrochemical process, which reduces significantly the buildup of sediment and scale within hot water systems.
Prevention of scale buildup and precipitation assists in the prevention of LP bacteria growth and also corrosion.
The system is chemical free and therefore prevents damage to system components, is not a health risk and is environmentally safe.
The Elgressy LPB system is patented in Israel and patent pending in the United States.
Tested and approved by the Spanish and Israeli Ministry of Health
The benefits of the Elgressy LPB system:
Removes harmful bacteria and health dangers
By facilitating the efficient eradication of the potentially lethal LP bacteria, the LPB system provides a safer and healthier environment.
Chemically free water treatment
No chemicals are used in the process so that the water remains clean and healthy and poses no threat to people or the environment.
Prevents LP bacteria re-growth
Reducing scale build up and sediment, the system removes the LP bacteria’s favorite breeding ground and ensures a bacteria free water supply.
Efficient operation and a longer system life
Because the system uses no chemicals, operation is more efficient, vital components aren’t damaged and the systems life expectancy is significantly increased.
Lower operating costs
Operating costs are significantly reduced because less maintenance is needed, no expensive and harmful chemicals are used and water efficiency is greatly increased.
L.P.B – The Electrochemical Process
The Elgressy LPB system destroys buildups of the LPbacteria, and prevents its reestablishment in hot water subsystems by using an electrochemical process.
Three Step Process:
At the bottom of any hot water tank, there existsthe perfect environment for the development of LP bacteria – sediment buildup. The LPB system prevents the buildup of sediment by causing turbulence at the water entry point thus preventing sediment and scale buildup and depriving the bacteria of their growth medium.
Inside the reaction tank are unique titanium and nickeloxide anodes, patented by Elgressy Engineering. With a life expectancy of several years, these anodes do not cause corrosion or water contamination. When direct electric current is passed through the anodes a tiny and controlled amount of free chlorine (CL2) is produced along with oxygen radicals. Together they help disinfect the water. Additionally, the pH levels of the water are raised to 14, especially near the walls of
the tank. Such high pH levels prevent the developmentof micro-organisms.
As an additional safeguard, once the water has undergone treatment in the LPB system, it is pumped through heat exchangers where temperatures exceeding over 70O C are attainable that destroy any remaining bacteria. 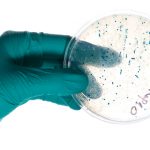 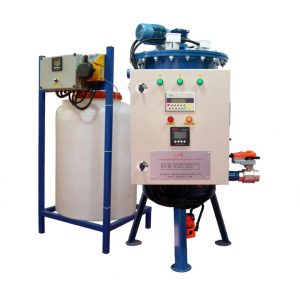 Legionella bacteria are found in every possible water source,
with the best conditions for growth prevailing in hot water
systems.

Traditional treatment against Legionella is based on chlorine
dioxide dosing, which is dangerous, expensive and corrosive.

Traditional treatment against Legionella, is based chlorine dioxide dosing.
Chemical dosing, however, has its deficiencies:

4. Maintenance is frequent and continuous

The Cl02 is continously monitored and injected into the hot and cold water systems’ main supply line to ensure
>0.2ppm in the main return line.

In addition to the electrochemical disinfection process, the LPB systems precipitate some of the scale present in the water, thereby diminishing the bacteria natural breeding ground.